A couple surprise outcomes last Sunday have made the races for the 1st round byes and general playoff seeding considerably more interesting with just under a month left of the Spring 2022 regular season. The Upcountry Dirtbags, La Perouse Pirates, and Makena Royals are the only teams to have clinched playoff spots to date, and two of those three teams figure to secure the 1st round bye awarded to the top two seeds entering the playoffs.

Following a come from behind, walk-off win over the Kihei Centipedes on Sunday, the Dirtbags find themselves in sole possession of first place at 9-2 with a relatively favorable schedule remaining, with their final three games coming against opponents who currently have a combined .290 win percentage. The biggest challenge for the Dirtbags figures to be overcoming the departure of rookie sensation Peter Reyes, who is no longer on island.

After a Royals forfeit on Sunday, the Pirates currently hold the second seed by virtue of the head-to-head advantage over the Royals. In terms of opponents’ win percentage, the Pirates have the friendliest remaining schedule (.281 wpct) with their biggest remaining hurdle being the Wednesday night match up with the Central Rays this week.

Following an 8-0 start to the season, the Royals have dropped three straight, however they also have a favorable remaining schedule and are in a position to benefit from a misstep by either of the two teams ahead up them. It’s worth mentioning, barring additional forfeits, both of those teams hold tie-breaker advantage over the defending champs.

The Rays will clinch a playoff spot with a win or a Centipedes loss, and after a slow start, they have come on strong of late, winning 5 of their last 6 games, including a convincing victory over the Royals on March 20. They are currently inline for the 4th seed and will need some help to improve on that standing.

With remaining match ups against the Dirtbags, Rays, and Royals, the West Maui Brewers have the toughest remaining schedule on paper (.697 wpct) and they still have some work to do in order to secure a trip to the playoffs this season.

One of the more intriguing story lines to follow over the next month plus will be how much the addition of former Major Leaguer John Lamb boosts the Lahaina Warriors as they look to build off a huge victory over the Rays this past weekend. The Warriors currently control the 6th seed with a 1.5 game lead over the Centipedes for the final playoff spot. The Warriors have tough match ups against the Royals and Dirtbags left on the schedule, as well as a game against the Centipedes the last week of the season which has the potential to be for the final playoff spot.

The Centipedes have their work cut out for them over their final three regular season games if they are going to make a push for a playoff spot. All three games left for the ‘Pedes are against teams ahead of them in the current standings (.563 wpct), including the aforementioned season finale against the Warriors.

The Pacific Hurricanes maintain the slimmest of chances for the final playoff spot, but could help their chances with a mid-week game against the Warriors this Tuesday night. And regardless, they have the opportunity to play spoiler for 4 of the teams described above.

Check out the schedule for details on all the remaining games, and be sure to check back on the website or our social media pages (Facebook, Instagram) for plenty of updates and content as the Spring 2022 regular season enters its final month. 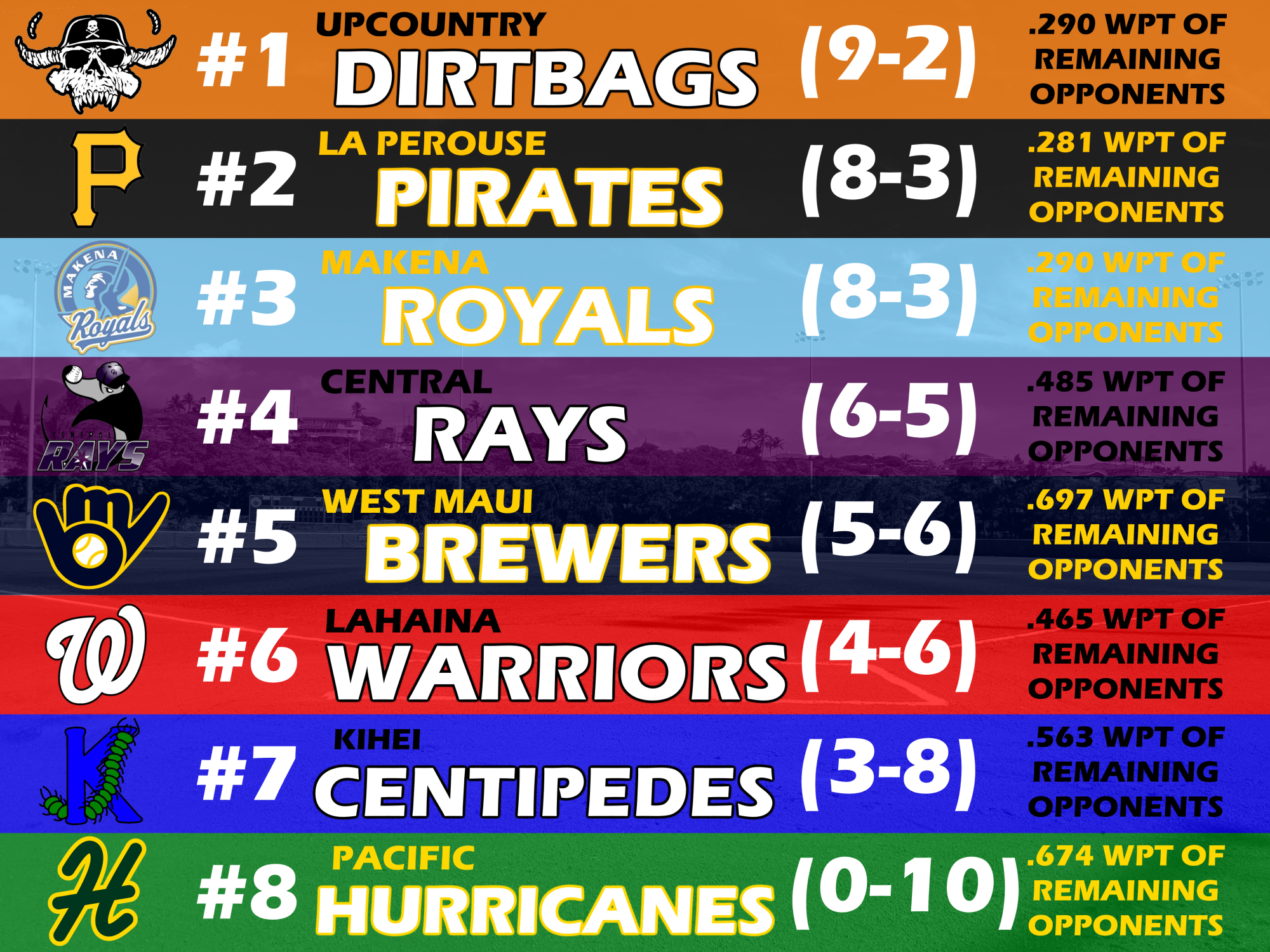